Don't let the cold keep you from visiting us! Our facilities are open and ready to keep you warm. Don't forget your toque!

Call center and treatments available every day from 9:30 am

J.C. Willard Sawmill was founded in Bolton in 1860. At this time, the village was named Willard’s Mills, and the Missisquoi river was named Black River. The sawmill was built next to the waterfall, where a dam and tank were erected to operate the sawmill. The other side of the river used to have a flour mill.

The mill’s exploitation ended in 1907 after a fire that caused the loss of hydraulic power.
Since 2001, Spa Bolton offers a privileged access to the waterfall and bed of the Missisquoi river, as well as outdoor hot baths, saunas and massage therapy services, available all year long.

He has won 9 Stanley cups and was the first winner of the Bill Masterton trophy honoring the most honest and hardworking players.

Hoping to spend more time with his father, Claude Provost Jr often accompanied him to his training in Montreal’s Palestre Nationale.

It was at this time, aged only 6 years old, that Spa Bolton’s owner and founder discovered the benefits of saunas.

Claude Provost Sr is a Hockey legend with 5 Stanley cups won from 1956 to 1960 while playing with Montreal Canadiens. He might be the only player from this team to not be honored in Toronto’s hockey hall of fame, but he is the only one with a Spa dedicated to his memory.

To the athlete, man, friend and father he was!

Your product has been added to the cart! 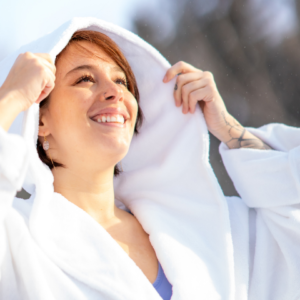 Rental of a Spa Bolton robe.

Rental of a bathrobe, towel and reusable water bottle.

17.00$
No thanks
We use cookies on our website to give you the most relevant experience by remembering your preferences and repeat visits. By clicking “Accept All”, you consent to the use of ALL the cookies. However, you may visit "Cookie Settings" to provide a controlled consent.
Cookie settingsAccept all
Manage consent

This website uses cookies to improve your experience while you navigate through the website. Out of these, the cookies that are categorized as necessary are stored on your browser as they are essential for the working of basic functionalities of the website. We also use third-party cookies that help us analyze and understand how you use this website. These cookies will be stored in your browser only with your consent. You also have the option to opt-out of these cookies. But opting out of some of these cookies may affect your browsing experience.